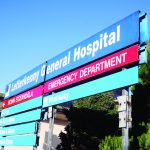 Gardai have confirmed to Highland Radio News that they are investigating the sudden death of a 17 year old girl at Letterkenny General Hospital in the early hours of this morning.

A spokesperson indicated they are now awaiting the results of a post mortem examination before determining the direction their investigation will take.

It's understood the girl was out last night when she became unwell and was rushed to hospital, where she later died.