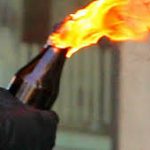 Five teenagers have been arrested in Derry after more disorder in the Leckey Road and Collon Lane area of the City last night.

Police say they came under attack with petrol bombs and missiles when they responded to reports of young people setting pallets and rubbish on fire in the Leckey Road and Westland Street areas.

Police have confirmed that four boys were arrested in the Westland Street area on suspicion of riotious behaviour, one aged 14 and three aged 16. They were subsequently released on police bail pending further enquiries.

Meanwhile, a 16 year old was arrested in the Collon Lane area on suspicion of disorderly behaviour. He has been released pending a report to the Public Prosecution Service. A crate of petrol bombs and a number of other items were seized by police.

Chief Inspector Andy Lemon says the prompt actions of police prevented a repeat of the disorder on Monday night.

He urged parents to make it their business to know where their children are, and warned young people involved in disturbances that they risk being arrested and getting a criminal record which could affect their lives for a very long time.