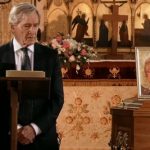 It was a sad farewell tonight in Corrie as the street attended Deirdre Barlow’s funeral.

Anne Kirkbride, who played Deirdre for 42 years in the ITV soap, died in January at the age of 60 of cancer.

The actress had taken a break from filming after her diagnosis and it was written into the show’s script that she was visiting a friend. Last week her fictional family and friends were told Deirdre had died from a possible aneurysm.

Her on-screen funeral was always going to be emotional.
Ken’s watery eyes and Eileen and Liz swapping memories of Deirdre was too much for some viewers to bear.

Nina Simone’s Feeling Good was played as Deirdre’s coffin was carried down the aisle. But when the whole cast sung Bridge Over Troubled Water, it sent us all over the edge.

But this is Corrie so it wasn’t all plain sailing. Ken had some harsh words for Tracy who fled the church mid funeral, followed by two ex-husbands.

Ken’s emotional speech, involving another dig at Tracy and mention of Twitter debates, was the perfect send off. But when the church erupted into a slow round of applause, it all felt eerily real.