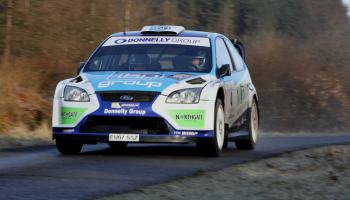 Donegal driver Donagh Kelly and his Derry co-driver Kevin Flanagan in their Ford Focus WRC have clinched the Triton Showers National Rally Championship courtesy of second place on the McCormack Opel/Sligo Park Hotel Rally, round six of the eight round series.

Outgoing champion, Declan Boyle and his co-driver Brian Boyle (Ford Fiesta WRC) won the event – 30.6 seconds ahead of new champions, who were presented with the Vard Memorial Trophy at the finish ramp in Sligo.

It is the first time since the inception of the championship that two drivers from the same county have won the national title, Cork drivers Mick O’Connell and Ger Buckley were the respective winners in 1978 and 1979.

Former champion Niall Maguire and his co-driver Enda Sherry (Subaru WRC) were some two minutes further behind in third.