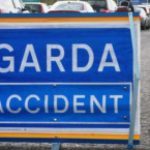 A 21 year old man is dead following an overnight collision in Inishowen. The collision happened at Carnashannagh, close to the Halfway House at Tooban, Burnfoot.

Gardai say at approximately 11.30, the car collided with a bollard. There were three men in the car at the time of the collision. One passenger was fatally injured and pronounced dead at the scene, the 18 year old driver and another 21 year old passenger were brought to Letterkenny General Hospital with non life threatening injuries.

The road between Tooban and Burnfoot is closed for a technical examination, and diversions are in place.

HGVs are being advised to travel via Quigley's Point and Carndonagh.

The diversions are expected to be in place until early afternoon.