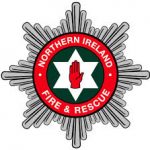 Just after 7 o'clock, they were called to a rubbish bin fire in Brandywell and attacked, with a similar situation in Galliagh shortly after 10 o'clock last night.