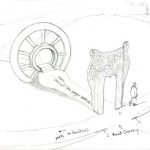 Almost 10 years after it was first proposed and commissioned, a sculpture honouring the role of women in Derry’s shirt factories has not yet been erected.

Foyle MLA Maeve Mc Laughlin says the ongoing delay to what should have been a straight forward project is nothing short of a disgrace..............