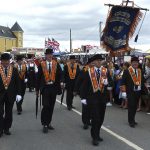 Thousands of Orange Order members and supporters are expected in Donegal today for the annual 12th of July parade at Rossknowlagh.

President Michael D.Higgins had been invited to attend, but declined as he had other engagements.

The parade starts at St John's Parish Church at 12.30 this afternoon, heading for the beach where the keynote address will be given by Harold Henning, the Deputy Grand Master of the Orange Order in Ireland.

Gardai will be on duty, but say their emphasis will be on traffic management, as traditionally, the Rossknowlagh march has always been a good natured and peaceful one with no history of tension or difficulties.

Lodges from a number of towns in Donegal including Manorcunningham and Raphoe will be joined by colleagues from lodges on both sides of the border for the annual demonstration, which traditionally takes place on the Saturday before the twelfth.