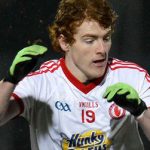 Tyrone move into Round 3B 0f the All Ireland qualifiers following a tough test against Meath at Healy Park.

Peter Harte's goal on the 54th minute was the difference in the two teams.

Tyrone manager Mickey Harte spoke after the game, and he was happy to advance to the next round.