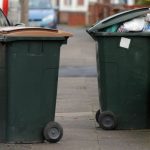 It's emerged that Donegal has the highest average bin charges in the country.

The revelation comes amid report that charges could be rise by up to 100 Euro a year as a result of plans to make households pay for their rubbish by weight.

The Irish Independent claims the increases will accompany new rules next year which will ban flat-fees to incentivise recycling.

Costs vary greatly throughout the country - Galway has the cheapest average bills at 204 Euros - while Donegal has the highest at an average of 346 Euro.