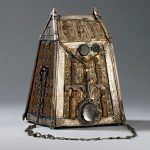 Donegal County Council says the St Conall’s Bell and shrine exhibition at the Donegal Museum in Letterkenny has been a major success.

The exhibitiion ends on Saturday afternoon, and thenm moves to Kilclooney in West Donegal, before returning to the British Museum.

The council says the exhibition generated an increase in visitor numbers to the museum, and also demonstrated the museum's ability to handle delicate historic artifacts.

The bell and shrine originated on Inishkeel Island off Portnoo.

Judith Mc Carthy is curator of the Donegal Museum......

Next Monday the ancient St Conall’s Bell and Shrine complete the final leg of their historic visit to the county as they make their way back to their place of origin, west Donegal.

Inishkeel Island off Portnoo is acknowledged as the relics original starting point. Access to it on foot is restricted to certain tides and weather conditions but for centuries it has been a place of pilgrimage as a result of its historical connections with St Conall.

A number of years ago a committee, spearheaded by the late Malachy Mahon and his wife Brenda, began a process of liaising with the British Museum, and then Donegal County Museum for approximately 18 months, to see if the matter could be revisited.

Donegal County Museum curator, Judith McCarthy met the couple and between them the various challenges in bringing these priceless items to the county were overcome.

“The British Museum previously had the bell and shrine in an exhibition entitled ‘The Treasurers of Heaven’ and on its website the items are listed as one of the highlights of their collection,” explained Judith McCarthy.

The curator, who just marked her 21st year at the Letterkenny facility last weekend, added while the British Museum was also keen to facilitate items such as these returning to their place of origin this also meant a host of stringent conditions and a regime of protocols that they hadn’t had to deal with up to this.

“These included fixing a timetable that would suit all parties, copious amounts of paperwork and reports covering everything from security, fine art couriers, environmental conditions and display facilities to name but a few and if these initial hurdles don’t pass the scrutiny of the British Museum’s curators, conservators and security advisors the artefacts don’t leave.”

Fortunately Donegal County Museum can boast the highest standards. It has achieved accreditation in the Museum Standards Programme of Ireland and it’s also a designated museum under the National Cultural Institutions Act.

“All of the environmental and security conditions we have to fulfil anyway and that requires training and expertise within our ranks and we’re funded by our local authority to have that,” she said.

Next Monday’s one day display at the Dolmen Centre in Kilclooney also had to fulfil certain criteria which, according to Judith, she was able to complete with the assistance of the local committee who were organising the event there.

“In order for the bell and shrine to go to the Dolmen Centre in Kilclooney we had to comply with similar conditions on the understanding it was only going to be for one day but thanks to all parties working together, we were able to ensure it could happen.

“Taking artefacts like these outside the confines of the museum is a big deal for all concerned,” she added.

The curator acknowledged the assistance such an event received thanks to the generous donation from Tim Kelly of Kelly Communications as well as the financial outlay from Donegal County Council to support the overall project.

“All of this has happened as a result of the local committee, the British Museum and Donegal County Council playing a role. There’s a lot of work behind the scenes that the public might not realise and this was a massive undertaking for all concerned”.

But all the hard work over such a long period of time has been worthwhile, said Judith.

“It’s been a great learning curve for me and staff at the museum, Assistant Curator, Caroline Carr, Jacqueline Abbas and Mervyn Whyte. The visitors have been overwhelmed too by the fact they can see such historic artefacts. It’s certainly increased visitor numbers and that in turn should also help bring people back here again in the future.

“I am very pleased to have been able to facilitate these items coming back to Donegal and that people have had the opportunity to see objects that they might never get a chance to see in Donegal again,” she said.

St Conall’s Bell and Shrine will be available for public viewing in Letterkenny until 4.30pm this coming Saturday, July 11.

The artefacts will then be going on display at the Dolmen Centre in Kilclooney between 10.30am and 5pm next Monday, July 13 and then going straight back to the museum in Letterkenny before leaving the following morning for their journey back to the British Museum and bring to an end what could only be described as an historic occasion for everyone connected with this event.