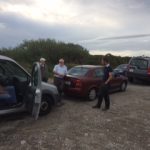 A protest outside the treatment plant which is under construction in Dungloe has ended after residents secured agreement from the contractor to repair the road.

Some residents claimed road outside the plant has been extensively broken up by heavy vehicles coming in and out of the site during the construction process, and as a result, some cars in the area have sustained damage.

A group blocked the road for a time this morning, and after discussions with the contractor, agreement has been reached.