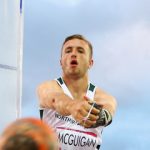 Athletics Ireland have announced the Irish u 23 team for the upcoming European Championships which will be held in Estonian from the 9th to the 12th July.

Three Donegal athletes are named to comptete - Letterkenny's Mark English and Karl Griffin of UCD will go in the 800m while Dempsey Mc Guigan who is based out of the University of Mississppi will throw in the hammer.

All three will be in action this weekend at the National U23 Championships at Tullamore.