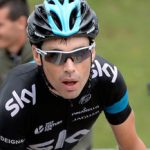 Philip Deignan will not be competing in this Tour de France after he was omitted from the roster which was announced by Team Sky this morning.

The Letterkenny rider will be disappointed having shown some brilliant form and work for the team this year and last.

Deignan was racing in Omagh over the weekend at the National Championship and his presence there was an indicator that he wouldn’t be riding the grandest tour of them all.

Nicolas Roche has been confirmed as a member of Team Sky which will be headed by 2013 winner Chris Froome.

The race starts on Saturday.