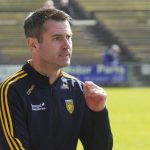 Donegal play Derry in the Ulster Senior Football Championship Semi-final this evening, with throw in at 7pm.

If Donegal win this game,  it will be their fifth consecutive Ulster Final.

Tom Comack has been speaking to Donegal boss Rory Gallagher. Before they discussed this evenings game, they began by talking about the departure of Donegal's sub goal keeper Michael Boyle and the return of Declan Walsh.