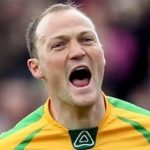 Colm McFadden has overcome sickness and takes the place of Marty O'Reilly.

Other than that it's the same fifteen which started the win over Armagh.

Donegal Manager Rory Gallagher feels if Derry play like they did in the first half against Down they will cause Donegal problems...

Donegal v Derry in Clones will be LIVE on Highland Radio this Saturday 27th June from 7pm with Oisin Kelly & Rory Kavanagh in association with Brian McCormick Sports & Leisure Letterkenny.