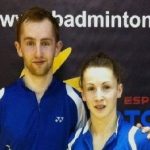 More good news coming in from the European Games in Baku this morning.

Chloe and Sam Magee have guaranteed at least bronze in the Mixed Doubles after winning their Quarter-final against Polish opponents this morning.

There was disappointment for the Men's Double's pairing of Sam and Josh Magee after they were well beaten in their semi-final, but the good news is it leaves them with a bronze medal from this week's Championship.They lost today's semi final by 2 games to nil to their Russian opponents.