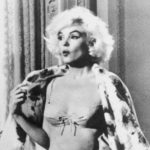 Dresses worn by Marilyn Monroe, Judy Garland and Greta Garbo are expected to sell for huge sums when they are auctioned off this week.

Meanwhile an embellished Ateliler Versace gown worn by Diana, Princess of Wales on the cover of Harper’s Bazaar magazine is expected to be sold for between 60,000 dollars (£38,225) and 80,000 dollars (£50,964) in the auction of Hollywood memorabilia.

Also due to go under the hammer is a black tuxedo worn by Marlene Dietrich, as well as Jayne Mansfield’s leopard print dress, a brown wool suit owned by Greta Garbo and Judy Garland’s floral gold lame brocade gown from The Harvey Girls in 1946.

A bidder hoping to drive away with a slice of Hollywood history will have a chance to buy Marlon Brando’s Harley Davidson motorcycle or the 1949 Mercury Series Custom Convertible driven by the leader of the Scorpions gang in the famous racing scene in Grease.

The rose-printed gown worn by Monroe is just one of hundreds of items belonging to the screen idol that are due to be sold.

Fans and collectors will have a chance to buy photographs, her sterling silver compact, items from her make up collection and even a signed white glove.

An embroidered purse given to Monroe by Joe DiMaggio’s mother for their wedding is expected to fetch around 20,000 dollars (£12,743), while the chaise lounge she reclined on in Let’s Make Love has an estimated value of 50,000 dollars (£31,861) to 70,000 dollars (£44,605).
Martin Nolan, executive director of Julien’s Auctions, said many pieces are considered as serious investments.

“Our audience is global and people participate worldwide, it is museums, investors and fans. People see this as an opportunity to own something that is really cool, a great conversation piece and over time it is very likely to appreciate in value. We are talking serious money, at thousands and sometimes hundreds of thousands of dollars.”

More than 1,000 items are due to be auctioned at the Hollywood Legends sale, which takes place tomorrow (June 26) and Saturday.