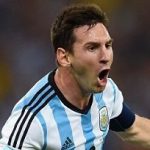 Several players have rubbished claims made in an Argentinean newspaper yesterday that Irish players were paid 10 thousand euro each not to injure Lionel Messi when they met in a friendly at the Aviva in 2010.

Kevin Kilbane, Keith Fahey, Keith Andrews and Darren O'Dea have all denied the claims while the FAI released statement last night stating there was no truth to the report.

The association say the claims made in La Naicion newspaper are baseless.

The FAI say they're considering legal action and have denied any suggestion that the match was arranged by FIFA in an effort to appease the Association in the wake of the Thierry Henry handball incident.

The match, which was the first international football match to be played at the redeveloped Lansdowne Road, was announced six months before World Cup playoff match between Ireland and France.