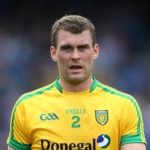 Donegal and Derry will train tonight ahead of Sunday's Ulster Semi Final in Clones.

The Derry team is expected to be announced after 8pm this evening while it could be Friday night before a Donegal starting 15 is released.

With the Donegal team at full strength, it's unlikely that there will be much change from the side which lined out in Armagh.

Eamon McGee has been part of Donegal teams who have won and lost on the the big stage, the Gweedore man says the thoughts of losing last years All Ireland is a motivating factor.....