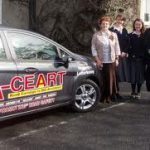 A Donegal road safety campaigner says imposing fines on boy racers is not a sufficient deterrent.

A number of young men appeared in court in Letterkenny yesterday charged with dangerous driving over the Donegal International Rally weekend.

All of those who appeared before the court were handed down fines ranging from €350 to €500.

Mary Clinton from road safety group A-CEART says she would have like to have seen them disqualified from driving............