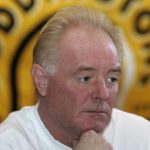 The 62-year-old star - who played cab driver Les Battersby for 10 years - is to reveal how he blew his entire £1m fortune after being axed from the ITV soap in 2007 on new Channel 5 documentary 'Celebs on Benefits: Claim to Fame'.

A spokesperson for the show said: "[The documentary] looks at the lives of former stars and professional high-fliers who now live on the poverty line.

"It features Bruce Jones whose divorce and struggle with booze has left him skint."

After being sacked from 'Corrie' for his drinking, Jones was given a suspended jail sentence for dangerous driving while drunk in 2010, had two houses repossessed and split from his wife, resulting in him living in a caravan with just £14 to his name at one point.
ADVERTISING

And last year the former soap star - who was reportedly paid just £15,000 to take part in 'Celebrity Big Brother' in 2013 - complained to police that he was owed £4,000 by an agent who failed to pay him for his appearance on 'The Jeremy Kyle Show'.

Bruce has previously spoken about how his change in fortune led him to attempt suicide.