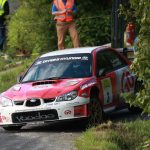 It’s the day after the finish of the Joule Donegal Rally.

The various winners from the front of the field to the class victors will be reflecting on their achievements this evening.

Fermanagh’s Garry Jennings and Letterkenny’s Rory Kennedy were the outright International winners yesterday, to take their second and fourth titles respectively, while the all Donegal crew of Manus Kelly and Donal Barrett are toasting a first ever National Rally win.

Two time winner, James Cullen says the event was right up there with some of the best ever Donegal Rallies…