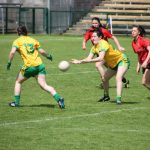 Donegal Ladies recorded a facile victory over a very young Down team at Brewster Park on Saturday.

Donegal led by 7-17 to 0-3 pts at half time and this allowed Manager Davy McLaughlin withdraw his u/21 players.

The scoring slowed down in the second half and Donegal ran out 61 point victors.

and  player Aoife McDonnell after the match....