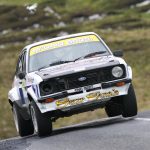 It's the third and decisive day of the 2015 Joule Donegal International Rally.

The crew will compete the final six stages of the event with rain set to play a factor on the final leg.

At the head of the International field Garry Jennings and Rory Kennedy lead in their Subaru from Declan and Brian Boyle's Fiesta. The National Rally sees Manus Kelly and Donall Barrett with a 20 second advantage over Brian Brogan and Damien Mc Gettigan

Oisin Kelly looks ahead to the day's action.....