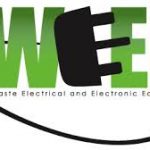 New figures show that last year 733 tonnes of electrical waste was recycled in Donegal but still over a 1/4 of people in the county are either hoarding or throwing out electrical waste.

The figures compiled by WEEE Ireland show an average of almost 5kg of electrical waste recycled per person in Donegal in 2014, over the EU target of 4kg per head.

Elizabeth O'Reilly, Head of Compliance in WEEE Ireland says that while Donegal people are recycling, the figure could be improved greatly: