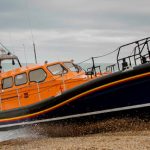 The new Lough Swilly based Shannon class lifeboat has been involved in its first major rescue operation.

A search was launched late last night when three fishermen from the Malin area went out to test a boat which developed engine failure.

When they didn't return, the coastguard was contacted and tasked both Lough Swilly lifeboat vessels, Greencastle Coastguard and the Rescue 118 helicopter.

The three men were located shortly after 2.30, and brought safely to shore.

Mark Barnett is the Coxwain of the Shannon class lifeboat.........