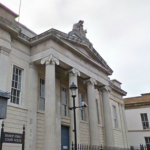 A man who stabbed a man in the back and injured a woman in the same incident in Derry in 2013 has been jailed for six and a half years.

32-year-old Adam McEwan from Newcastle, England admitted two charges of unlawfully wounding the man and assaulting the woman in a house on the Northland Road on February 10 2013.

Derry Crown Court was told that the male victim had returned to a house after meeting some people in a local bar.

At some stage it ended up with the male victim sitting chatting with the female victim and then the defendant came in.

McEwan was said to have been aggressive and the male victim tried to calm him down.

The man then decided to leave and as he went out the door he felt as if he had been hit in the back.

He looked round and the female was restraining McEwan.

The man went outside and realised he had been stabbed in the back and collapsed.

When police arrived the female pointed McEwan out to them and told them that she had seen him as if he was punching the man in the back.

It was also discovered that the woman had suffered two wounds to her arm that required stitches.

The male victim required staples in wounds on his back and arm.

When interviewed McEwan said he had no recollection of the incident.

Judge Philip Babington sentenced McEwan to six and a half years in prison of which half will be served in custody.