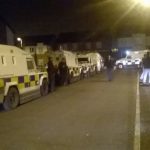 A number of people have been evacuated from their homes on the ouitskirts of Derry's Waterside.

A security alert has been ongoing since the early hours of this morning, with an army bomb disposal team examining a suspicious object at Glenrandel in Eglinton.

Residents are sheltering at the Foyle arena on the Limavady Road