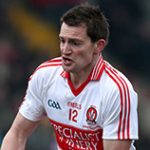 Derry have suffered a blow ahead of the Ulster Senior Football Championship semi final with Donegal.

James Kielt has decided to quit the panel ahead of the Clones tie on Saturday week the 27th June.

It understood the Kilrea attacker was unhappy not to be involved in the first round win over Down and has not reported for training since.

The Termon stopper is heading to the states to play with Donegal Boston for the summer months.

On the plus side for Donegal, versatile defender Declan Walsh is back in the squad.

The Malin man opted out of the panel in March but has been training since in Dublin .