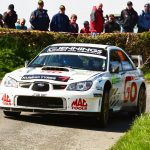 Fermanagh man Garry Jennings will be aiming for a hat trick of wins in his Subaru World Rally Car when he tackles the iconic Lurgan Park Rally on 4th July.

Once again the rally is attracting a top class entry, and Jennings will not get it easy as top drivers such as Kenny McKinstry, Cork’s Kevin Kelleher and 7 times Circuit of Ireland winner Derek McGarrity, all driving Subaru WRCs, bid for the honour of topping the Lurgan Park timesheets.

The Lurgan Park Rally has built a strong reputation over the years not just as a great family day out, but also as an event that attracts some unusual entries.

Just two noteworthy names this year are European Rally Championship leader Craig Breen swapping his ‘works’ Peugeot for a 2.5 Millington engined Escort backed by James Coleman. Breen was planning to drive the Escort on the Donegal Rally, but that plan was dropped so that Breen could concentrate on the European series Ypres Rally.

Another fabulous entry comes from Ballynure’s Robert Woodside to drive the Tuthill prepared Porsche 911 R-GT. Robert drove this very special Porsche on this year’s Circuit of Ireland and certainly wowed the spectators. Woodside commented. “We have a connection with Rushmere Shopping Centre in Craigavon, and they, along with Karcher who were involved in the Circuit, are instrumental in making this happen. I’ve competed a couple of times on the Lurgan Park Rally and always enjoyed it, so it should be really good in this Porsche!”