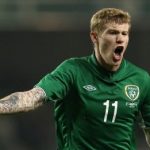 It’s reported this evening that James McClean is closing in on a deal with West Brom.

The fee is believed to be in the region of £1.5 million.

McClean has been linked with a move to Major League soccer in the states but it now looks like the Derry man could be set for a return to the Premier League.