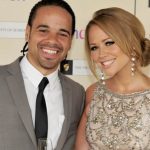 Former Girls Aloud star Kimberley Walsh has revealed how her boyfriend popped the question to her moments after she gave birth to their son Bobby.

The star, who has been with Justin Scott for a decade, said he went down on one knee in the hospital.

She told Hello! magazine: “I’d just handed Bobby to Justin, so he had our gorgeous newborn son in one arm and I remember Bobby had his eyes open. Bobby didn’t take his gaze off me as Justin slipped his other hand into his pocket and suddenly the pair of them were sinking down towards the floor .

“I said, ‘What are you doing?’, then Justin pulled out this gorgeous ring.

“We’d only just stopped crying from the joy and relief of finally meeting our baby, but that set us both off again. I was in bits.”

Kimberley, who has appeared on stage in the West End and starred in Strictly Come Dancing, told the magazine her former bandmate Cheryl Fernandez-Versini was in tears when she arrived to visit the new baby in hospital.

She added that Cheryl and their fellow former band member Nicola Roberts will be bridesmaids at their planned tropical winter wedding, and might even sing at the ceremony.

She said: “I said to them, ‘If either of you feel like doing a turn, just let me know’. I don’t want anyone to feel under pressure, but it would be fun.”