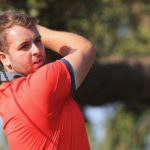 Ruaidhri Mc Gee remains on course to winning a European Tour card for next season after a very strong finish in Belgium over the weekend.

The Rosapenna man finished in joint third place at the KPMG Trophy on the Challenge Tour to jump seven places to second in the Road to Oman rankings.

McGee's final round 68 earned him a cheque of over €10,000 but more importantly he is now in a very strong position to move up to the European top ranks next season.

European Tour cards are awards to the top 15 on the rankings at the end of the season.