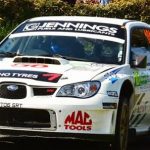 The 2012 victor has Letterkenny’s Rory Kennedy onboard calling the notes this year.

After his maiden triumph three years ago, mistakes have cost Garry another win on the showpiece event of the Irish Tarmac Championship.

Speaking with Oisin Kelly, Garry knows if his Subaru WRC is in full working order, he will be in contention…..

Tune into Highland Radio, online @ highlandradio.com and on the Highland Radio App this Friday, Saturday and Sunday for the LIVE stage by stage action from the Joule Donegal International Rally in association with The Pulse Venue Letterkenny.