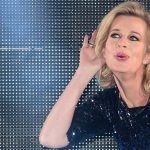 Katie Hopkins would love to rule the world – and now a new TV series will give her the chance.

The controversial columnist will lead a celebrity debate show called If Katie Hopkins Ruled The World for the show on TLC.

It will see her joined by celebrities and comedians who will discuss one of her rules that she would like to impose on life, on pet topics such as weight, sex and benefits, with the audience deciding whether the motion should be passed or thrown out.
Katie told The Sun: “People often tell me that I say the things they think but don’t have the courage to say. In this new show I’ll be the little voice inside their heads.

“Join me and let’s see what would happen if Katie Hopkins ruled the world. It could get messy.”

TLC boss Clare Laycock said: “The show is a unique forum to thrash out the issues being ranted about in pubs, on Twitter and in living rooms across Britain.”
The channel also aired Katie’s recent documentary My Fat Story, which saw her pile on the pounds and attempt to lose them again after making outspoken comments about obese people.

If Katie Hopkins Ruled The World is due to air in August.