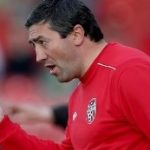 Derry City are on the road again this Friday as they travel to Louth to take on Drogheda United.

Coming off the back of a disappointing result against Shamrock Rovers on Monday evening, it will be vital for the Candystripes to start picking up points once again as they haven't won in the last seven league outings.

Sitting just three places above the relegation zone and with the mid-season break just around the corner, a win against an in-form Drogheda team would be more than welcome and see the side go to the break full of confidence.

Games between the two sides have been very tight affairs over the last number of years but the one tie so far this season saw the Candystripes come out on top with a three nil victory in the Brandywell, goals on that day coming from Barry McNamee and two from former Derry striker Anthony Elding.

Speaking ahead of the game Derry Manager Peter Hutton had this to say. “This is a very important game for us particularly with the break coming up. It will see us go into the break with some much needed confidence. Naturally enough after Monday night’s result the lads were a bit deflated early in the week but since them they have picked up and the lads are now looking forward to the game now. There is always some pressure but given the recent run of results it has built a little more, but it’s our job to make sure that it doesn’t affect us. We all want to do well and we all want to be successful and it has been a learning curve for some of the younger players but we know sometimes you have to experience the lows to enjoy your highs. We are still very confident in our ability and we know that once we get players back and maybe add a couple of fresh faces we will start to climb the table.”

It was also announced this week that Anthony Elding is to leave the club, Peter also thanked Anthony for his services and his professionalism while at the club and wished him all the best in the future.

In team news Stephen Dooley (back) is still on the treatment table but has returned to some light training while Ryan McBride misses out through suspension having been sent off on Monday evening.