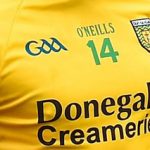 The Donegal County board have requested a hearing with the Ulster Council on the proposed bans handed down to the four Donegal Minor players and backroom team members.

The 8 week suspensions were served following an incident that took place involving an Ulster Council official at half time during the Ulster Semi Final win over Armagh.

Should their first appeal fail the Donegal County Board could go to Croke Park.

As things stand, the two players and two officials would miss the Ulster semi final with Derry on June 27th and the Ulster final in July should they make it.