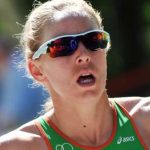 The former North West Triathlon Club member had a steady start in her first two World Series openers finishing 24th and 15th, but has been in scintillating form of late notching up a 7th, 6th and 4th place finish in the past three World Series races.

In her 4th place finish at the London World Triathlon Series, Reid clocked the second fastest run split of the day, only bettered by ten-times World Series race winner Gwen Jorgenson of the USA.

“I’m really pleased, it’s finally coming together for me.” Reid commented after the race.

“I didn't think I was going to run that fast. I really feel like I want to be in the top ten in the world and these last three performances are what I’ve really been pushing for.”