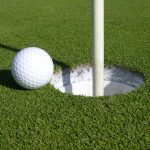 The committee of Dunfanaghy Golf Club has decided to revive the Pro-Am to celebrate their historic inclusion in the Golf Digest Top 100 courses listing for 2015 and to mark the success of the European Ryder Cup Team in Gleneagles last September under the inspired captaincy of Dunfanaghy member Paul McGinley.

The competition will be led by 52 of the top club professionals of the PGA plus there will be 52 amateur teams competing.

The event takes place this Saturday 13th and Sunday 14th and has a professional prize fund of €15000.

Golf has been played at the Dunfanaghy links since 1884 and they have been affiliated to the Golfing Union since 1906.