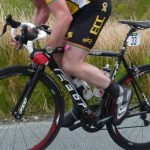 Danish rider Mikkel F Honore won the weekend's RAS Donegal which was based out of Ardara.

The Errigal CC man took the yellow jersey with 1min 07sec to spare over the rest of the field after 4 stages in the hills of Donegal.

Simon Toumey of Cork Giant was second in the overall standings while Derek Cunningham, Team Bikeworx Cellbridge, won the final stage that finished at the top of Glengesh climb, cementing his third place finish.

Claire McIlwaine, Pheonix CC, was the first lady home and took the overall by over 15 minutes from Michelle Geoghan, Saint Martin.