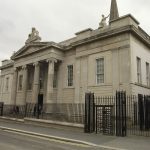 A 22-year-old man has appeared in court charged with an arson attack at the weekend.
Joseph Gallagher, of Glenvale Road, is charged with arson with intent to endanger life.

The charge relates to an alleged incident at a flat in Bayview Terrace on June 5.

An investigating officer told Derry Magistrates Court he believed he could connect the 22-year-old to the charge.

There was no application for bail and Gallagher was remanded in custody to appear in court again via video link on July 2.