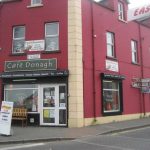 A café in Cardonagh has been robbed and ransacked.

The premises, Café Donagh/Patisserie de Pascal is situated on the Diamond in the town.

The incident occurred at approximately 2 o'clock this afternoon.

A young male entered the premises demanding the contents of the till be handed over.

He then threatened the proprietor with a knife.

When handed the contents of till, the man  said he didn't want to make his escape via the front door and broke a side window with a table.

It is thought he made his getaway on foot.

It’s believed he may have had an accomplice and  entered another business in the town.

Gardai were called to the scene and at this stage the culprit has  not been apprehended.

Gardai are currently investigating the incident.

Local Councillor Albert Doherty has been speaking to the proprietor: