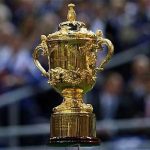 Launching on June 10, 100 days to go to the opening match, the Rugby World Cup Trophy Tour will travel through Scotland, Northern Ireland, the Republic of Ireland, Wales and England before arriving at Twickenham Stadium on September 18 ahead of the Opening Ceremony.

As part of the Rugby World Cup Trophy Tour, Donegal Town RFC along with any of the five other rugby clubs in County Donegal who wish to participate will welcome the Webb Ellis Cup to the Donegal Diamond where the Trophy will be on display between 6.00 pm to 8.00 pm. (If the weather is very poor the event will be held in the Abbey Hotel).

The event will start with the Webb Ellis Cup arriving in its specially commissioned Land Rover Defender led by young players representing the participating clubs from County Donegal. After welcome messages from local politicians and other dignitaries there will be ample opportunity for all in attendance to take their own photographs with the trophy.

“This is the biggest Rugby event ever to be hosted in Donegal and Donegal RFC are confident that the people of Donegal will turn out to support this unique opportunity to see and welcome such a prestigious trophy to the County. The excitement amongst Rugby fans from across the world will be really starting to build when Donegal hosts the Webb Ellis Cup with less than 100 days from the start of the Tournament.
We are delighted to have the full support of Donegal County Council, Donegal Town Chamber of Commerce, Abbey Hotel and the Ulster Branch IRFU,” said Charlie McGinty President of Donegal Town RFC.

The journey throughout the UK and Ireland aims to engage fans and give them the opportunity to build unforgettable memories as part of their own Rugby World Cup 2015 story.

Rugby is at the heart of the Trophy Tour engaging with over 100 rugby clubs, sports events, stakeholder visits, Worldwide Partner activations and iconic landmarks which will feature as part of the RWC Trophy Tour with over 300 events programmed across the 100 day continuous tour.