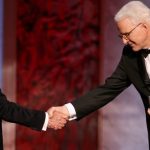 A host of stars have paid tribute to Steve Martin as he received the American Film Institute’s Life Achievement Award.

Mel Brooks presented Steve with the award at a private ceremony at Hollywood’s Dolby Theatre.

Jack Black opened the evening with a most earnest rendition of I’m Picking Out A Thermos for You from Steve’s 1979 breakthrough film, The Jerk.

Sarah Silverman, Dan Aykroyd, Amy Poehler, Tina Fey, Steve Carell, Lily Tomlin and Carl Reiner were among those who appeared at the celebration, set to be broadcast in the US on June 13 as a special on TBS.