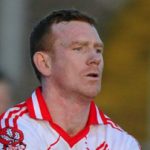 Fergal Doherty has been passed fit and has been included in the Derry midfield for the Cetlic Park tie.

Eoin Bradley is included in attack, as is captain Mark Lynch - but he's likely to drop back into midfield

The Down team could be named later this evening.

Derry were relegated from Division1 but Captain Mark Lynch says positives did come out of the league and he's hoping the Oak Leaf boys have a long summer.........

Derry manager Tom McLean is sticking with the same starting fifteen that began last week's semi final win over Down.