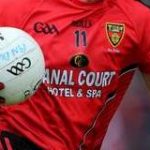 The Down team to play Derry this Sunday in the quarter final of the Ulster Championship has been named.

Jim Mc Corry's team shows two changes from the side that played in the League final with Ryan Boyle coming in for Gerard Collins and Peter Fitzpatrick in for Peter Turley. Mark Poland is also fit to start.