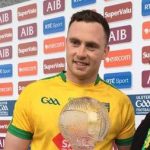 The GAA/GPA Opel player of the month for May shortlists have been unveiled.

McElhinney’s nomination comes after his man of the match performance against Tyrone in the Ulster Championship opener.

The winners of the GAA/GPA Opel Player of the Month Award for May will be chosen by the inter-county playing body, and will be announced on Wednesday 10th of June