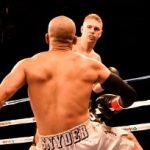 Jason Quigley has announced he'll be back in ring action on Saturday 11th July.

The undefeated Donegal middleweight will be fighting at the Los Angeles Sports Arena in Downtown LA with an opponent yet to be named.

Jason has had a fantastic start to his professional career winning all six of his fights within the distance.