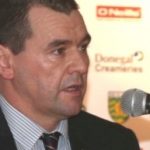 The Donegal County Board have broken it's silence on claims a Donegal minor player was taunted about his father's death during the Championship game between Donegal and Tyrone last month.

Two weeks ago manager Declan Bonner made the claims his captain was verbally abuse in relation to his fathers passing which resulted in the Tyrone County Board denying the allegations in an official statement.

Last night Donegal Chairman Sean Dunnion read out a brief statement at a meeting in front of all the club delegates.

He said, “In relation to press coverage of incidents that had happened in our minor championship game against Tyrone, all I want to say is that we were aware of the incidents from early in the game."

“We carried out an extensive investigation into the incidents subsequent to the game and have forwarded that information to the Tyrone county board."

“We are 100 per cent satisfied of the veracity of the incidents that took place in the course of the game and we are now leaving it in their hands as we look forward to the Ulster quarter final.”